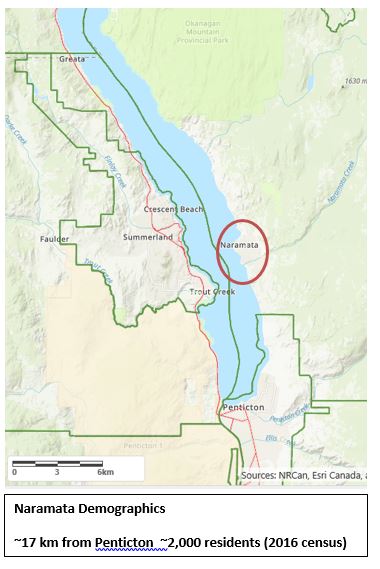 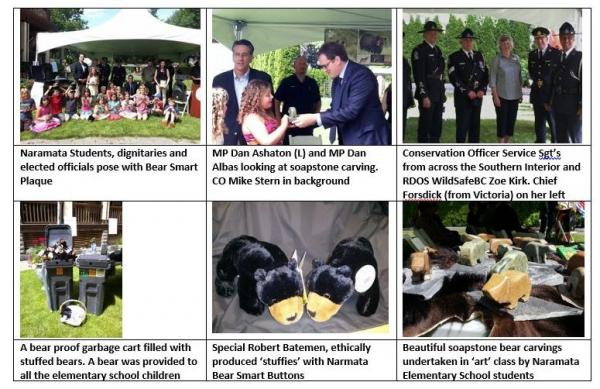 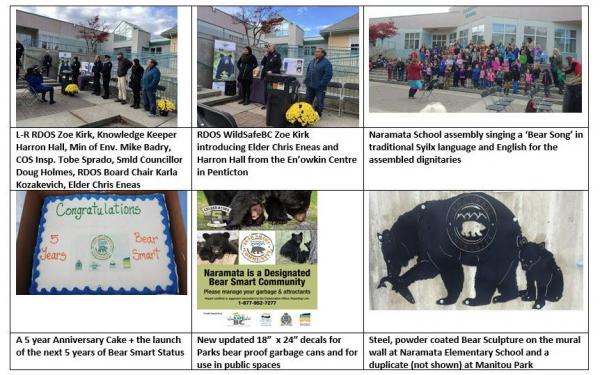 For more information on this program or Bear Conflict reduction, contact RDOS WildSafeBC Community Coordinator at 250-492-0237.

Naramata is the 6th Community in BC to achieve and be awarded the prestigious designation of Bear Smart Status by BC’s Ministry of Environment.

Naramata is situated on the shores of Lake Okanagan in a largely agricultural community with a village core that straddles a Kokanee Salmon bearing creek, putting it right in the middle of prime bear habitat. The population of just over 2400 also is a tourist mecca, receiving thousands of guests each summer to enjoy the relaxed pace, beautiful beaches and abundant accommodation opportunities. Naramata’s location and level of bear awareness made it a hot spot for Conservation Officer bear complaint calls. On an average, 6 to7 bears were destroyed each year in that community as they became habituated to humans and their waste.

In 2010, the Electoral Area Director became so concerned about these escalating issues that the Bear Aware Program was initiated to help residents understand the correlation to attractants and bear issues. Over the next three years, RDOS Bear Aware (now WildSafeBC) worked closely with residents, commercial, agricultural entities and the school to reduce the incidence of wildlife conflict in the area. The Regional District changed its garbage pick-up day to better align with Bear Smart principles and imposed a Bylaw which restricts residents to placing garbage to the curb on the morning of the day of pick-up only. The local waste contractor provided the option to obtain bear proof garbage containers – starting with a free three-month pilot program. The WildSafeBC Community Coordinator worked through all 6 criteria http://www.env.gov.bc.ca/wld/bearsmart/#second_ for bear smart status, submitting the application reports and documents required. BC Ministry of Environment Wildlife Conflict Manager reviewed all documentation, conducted an independent, undisclosed audit in the community and then made recommendations to senior government officials for their decision.

On June 23rd 2014, at a well-attended community celebration, Naramata was awarded Bear Smart Status By the Ministry of Environment and the Conservation Officer Service. Federal, Provincial and local government politicians along with many on and off-duty Conservation Officers from across the Interior came to show their support for the efforts made by the community to achieve Bear Smart status. They congratulated and encouraged the community to continue its commitment to attractant management to maintain the status over time.

Bear Smart signage is now posted throughout the community, starting with the single road entrance to the community and in all parks and public spaces. The school children are big Bear Smart enthusiast and actively promote their knowledge and understanding about the wildlife with which they share their ecosystem.

The Bear Smart/WildSafeBC program began seeing immediate results starting right from 2012 – with calls to the Conservation Officer Reporting Line declining, and lack of the need to destroy any bears in that community. In fact, since 2012, only 2 unthrifty bears have been destroyed. Are there fewer bears? No. Residents have learned how to protect their community through attractant management, understanding bear behaviors and drivers and modifying their actions accordingly. Bear Smart is not just a one day celebration, but an ongoing commitment that is monitored by the Ministry of Environment. If things change and residents become complacent about attractants, the status can be revoked. Naramata is an inspiration. Residents have demonstrated what a community can achieve when they work together. For documentation and application details: