A community water system has been proposed on a number of occasions since a Feasibility study which was conducted in 1995. The town site has a total of 447 designated building lots some of which have a single dwelling constructed over 2 sites in order to accommodate the installation of a well and septic system. The study was updated in 2005, and again in 2008. Projected costs were the dominant factor stated in The most recent proposal to the community was in 2016 at which time the cost was the main reason for not supporting the construction project.

As opposition to the project was greater the project was abandoned. Had the interest been positive the RDOS would have engaged a consultant to provide preliminary designs and costing including a detailed layout.

The negative response plus the large demands on the engineering team, resulted in no additional information being pursued.

When a sufficient number of residents request the RDOS to look into a potential water system, the RDOS has responded each time. Unfortunately, the public opinion at large has been negative thus resulting in additional work being stopped.

If further work is to be completed in the future, a significant amount of public support will be required and the community will be engaged at the early stages again.

The RDOS sent out 375 surveys and received back 147 surveys. Results of question asked below:

Would you be interested in hooking up to a community water system?

A Public Information Meeting was held at the Tulameen Community Hall on November 29, 2016 where RDOS staff, engineering consultants and Area H Director, Bob Coyne, discussed a proposed Tulameen Water Distribution System. The intent of the preliminary informal meeting was for the Electoral Area Director to be able to gauge the interest from property owners for a proposed establishment of a Local Service Area for the purpose of installing a Tulameen Community Water System to deliver fire protection and potable water to the community. The meeting was very well attended by local residents and several property owners who travelled from as far away as the Lower Mainland and Lake Country.

Several informational story boards were showcased that outlined the preliminary engineered design of the water system. Additionally, a suggested phased approach for the installation of the infrastructure and preliminary costs attributed to each phase was identified. A subsequent effect of annual costs to the property owners was also noted for these phases.

The project is at the infancy stage of discussion. The next step, with Director approval, would be to perform a hydrological study, a detailed design of the community water system with attributable potential costs to the property owners and communicate these findings back to the community. The timeline for the next Informational Public Meeting would be in the Spring/Summer of 2017 when the majority of the property owners are in the area to attend.

" I would like to thank all the people from Tulameen that attended the Public Information Meeting. I was very pleased to see the number of people that attended, some came from the coast, the Okanagan and lots of locals.

There were lots of positive comments and lots of questions. We did our best to answer as many questions as possible. There were questions we couldn't answer as this project is just in the early planning stages. We had two engineers involved on hand to answer questions and explain how the system could be built.

Please fill in your survey and add any comments or concerns you may have and send it in to the Regional District of Okanagan-Similkameen, info@rdos.bc.ca. This is very important as this is how we are going to gauge the community interest in the proposal.

Again thank you to everyone that attended the meeting or sent in their questionnaire."

All information presented at the November 29th meeting is available to view below by clicking on the supplied links. The RDOS kindly asks the property owners to submit their completed survey back to the RDOS for processing by December 14, 2016.

The proposed water system would provide domestic and fire suppression service for the Community of Tulameen. Proposed works are illustrated on Figure 2 and would comprise:

A phased construction plan has been proposed for this project.  Ideally, sufficient funds would be available to construct a water supply well, a reservoir and the water distribution system in the community core area. Infrastructure assistance programs could then be targeted to assist with build-out of the full water system after the initial phase has been completed.  The current phased plan for this project is described as follows:

Components are illustrated in red on Figure 2 and would comprise:

No topographic information is available for the reservoir sites therefore the location as shown in Figure 2 is approximate.  Components of Phase 2 are illustrated in green on this figure and would comprise: 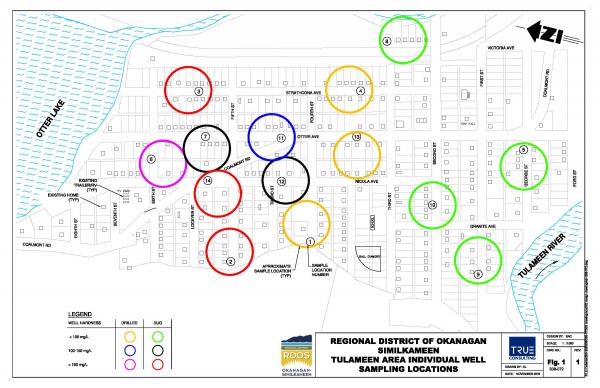 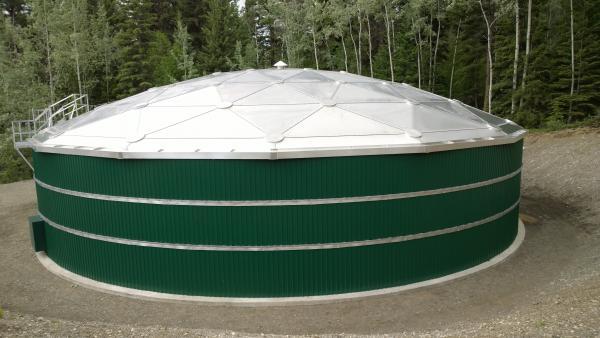