The new Okanagan Falls Wastewater Treatment Plant (WWTP) has been processing wastewater since March of 2013. All of the wastewater previously sent to the old treatment plant is now being sent with a lift station to the new treatment plant site. The treatment process removes the organics and nutrients from the wastewater through a process called Biological Nutrient Removal (BNR). The effluent is very highly treated before discharge into the Okanagan River Channel.

The Regional District of Okanagan-Similkameen (RDOS) is actively working on the development of a polishing wetland to support enhanced wastewater treatment at its Okanagan Falls Wastewater Treatment Plant (WWTP). The polishing wetland project has been in the future vision for wastewater treatment in the area since the idea was initially discussed during the development of the ‘Okanagan Falls Sewage Treatment Plant – Strategic Review’ in 2005.

Although the WWTP currently discharges high quality effluent to the Okanagan River that consistently meets the required targets on the Operation Certificate, the addition of a polishing wetland represents an opportunity for innovation, using natural ecosystem processes and phytoremediation to improve wastewater further. In addition to serving a valuable role in wastewater treatment, the wetland also has the potential to act as a research, education and interpretation site.

The primary purpose of the polishing wetland is enhanced treatment. A treatment wetland is a human-made, engineered system that uses wetland elements (i.e., plants, water and soils) to improve water quality. It has the potential to remove contaminants that are beyond the capability of wastewater treatment plants.

In 2015, the Regional District purchased a property for developing a wetland system. The following figure shows the location of the property to the wastewater treatment plant. 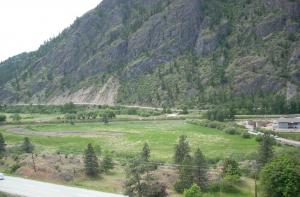 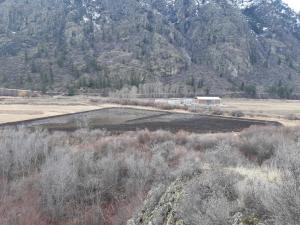 The construction of the polishing wetland is anticipated to be complete by February 2020 followed by a commissioning period for plant establishment. Initial wetland seeding will take place in 2020, after construction is complete. Commissioning of the polishing wetland necessitates a multi-year period of water level management (during the growing season) to encourage wetland plants to grow. The commissioning process is anticipated to commence in March 2020 and is estimated to take two to three years to complete.

Funding for the $1.06 million wetland system project comes from two different sources. The project received $361K from the Regionally Significant Projects and $700K from the Community Works fund.

The Okanagan Falls Wastewater Treatment Plant (WWTP) has been processing wastewater since March 2013. Due to funding limitations, the facility and equipment required to process and separate solids from the wastewater did not fit into the budget and it was decided to defer its installation to a later date when adequate funding could be acquired.

The current Okanagan Falls WWTP carries out thickening of the sludge which is stored in underground-aerated tanks prior to septic trucks hauling the thickened sludge over 22 kms to the Penticton Wastewater Treatment Plant for the required further dewatering and processing. Currently about 4 to 6 truckloads of sludge are taken to the Penticton WWTP each week.

With the addition of the solids processing facility at the Okanagan Falls WWTP, the hauling and processing costs paid to a third party will substantially decrease. Reduced trucking will also have positive benefits in reduction of carbon dioxide (GHG) emissions. 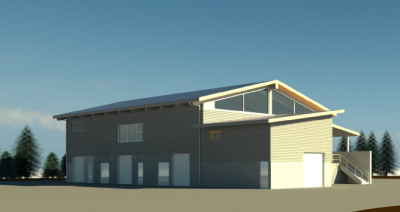 Funding for the $2.06 million solids processing facility project comes from the Strategic Priorities Fund administered by the Union of British Columbia Municipalities (UBCM).