Starling Control Program for the Okanagan-Similkameen

In 1890 The American Acclimatization Society brought 60 European Starlings (Sturnus vulgaris) to Central Park in New York City in order to be one step closer in achieving their goal to establish all of the birds featured
in Shakespeare's plays into North America. A further 40 Starlings were introduced in 1891. This species is now firmly established across the entire continent and are one of the most common and widespread birds in North
America. Starlings are listed on the World Conservation union List of the World's 100 Worst Invasive Species.

First sightings of Starlings in the Okanagan Valley were reported in Oliver in 1945. First nests were discovered in Vernon in 1952. It is believed that starlings became a successful breeding species in the Okanagan sometime
between 1952 and 1956.

Starlings are intelligent and adaptable birds. They exist in almost all habitat types but are most commonly associated with human habitations. Starlings form large flocks in early fall and can be see flying from roost to
field in great numbers. They may fly 30 or more miles from roosting to feeding sites. Flocking is beneficial to individual birds because more time can be spent foraging for food rather than looking out for predators.

In addition to eating and damaging tree fruit, grape and berry crops, starlings also spread diseases such as Salmonellosis, Chlamydiosis, John's Disease, avian tuberculosis and histoplasmosis. Starlings are very aggressive
competitors and are relentless in taking over nesting cavities that would otherwise be used by bluebirds and other native songbirds. They will take any suitable site for nesting and evict any previous owner; driving
native birds from their territory. They sometimes watch other birds build a complete nest before forcing them to leave. Starlings have two broods a year with four to five eggs in a brood. They average 8 offspring
per year. Incubation of the eggs takes 12 days and the fledglings leave the nest after 25 days. The young leave to join other juveniles and form flocks that move on to other territories. 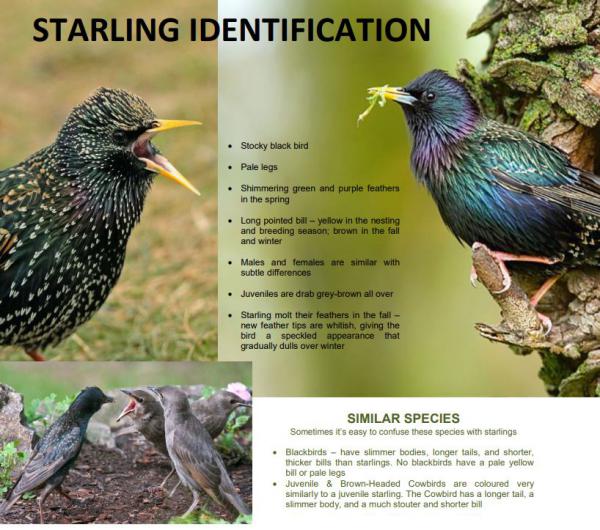